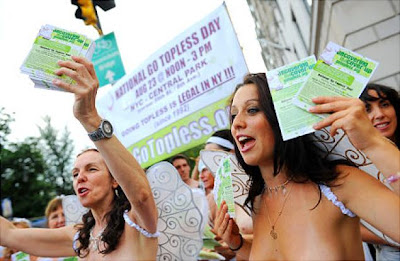 Topless women march in Central Park for right to bare breast. They actually want to flex their muscles at the parks just like the Men. Some passers-by  were shocked, Others disgusted. But for some, it was the breast day ever!

Dozens of semi-nude women gave the city a Double-D eyeful Sunday when they bared their boobs in Central Park and then marched through the streets.

The daring display was part of “National Go-Topless Day” – indeed, there is such a thing – and stunned jaded New Yorkers and wide-eyed tourists alike.

“This is unbelievable – and super,” said Dalvin Jan, 21, who rents bicycles for a living on Central Park South. “I’m going to tell my wife to join in.”   See Video and More Images after cut…


With Chaka Khan‘s “I’m Every Woman” blaring from speakers and chants of “free your breasts, free your mind,” the troupe of bare-breasted women – and their enthusiastic male supporters – paraded their way along Central Park South. “We’re all here for the same reason – to allow women to be free in the park like men,” organizer Sylvie Chabot, 54, of Montreal, told the crowd at a midday rally at Columbus Circle.

Motorists honked their horns in support while bemused tourists took photos from passing tour buses.
“I’m pretty surprised,” said Carolyn Meierjurgen, 49, of New Jersey, who was taking a horse carriage ride in the park. “If they want to do it, let them do it. I couldn’t,” she admitted.

Several unhappy onlookers complained to cops who were powerless to intervene.

New York is the only state in the country where women can be topless legally, after a 1992 ruling in the state’s highest court. That means any woman can walk around the city at any time with no shirt on.
Among the speakers was Ramona Santorelli, of upstate Rochester, who was the plaintiff in the 1992 case.
“It’s not about baring your breasts,” she said. “But the true meaning is to normalize women’s bodies.”
Yesterday’s protesters noted that is not always the case.

Artist Jill Coccaro, who goes by the name Phoenix Feeley, tested the New York law in 2005 after cops arrested her for exposing her breasts on Delancey St. She cited the 1992 ruling when cops grabbed her, but was held for 12 hours. She sued. The city later settled for $29,000.

Topless events took place across the country, from Los Angeles to Columbus, Ohio.
Organizers gathered signatures for a petition asking Congress to relax nudity laws, which they plan to hand over on Go-Topless Day next year.

Most passersby were amused by the sight of scores of half-naked people.
“It’s nice for them,” said unfazed Swedish tourist Birgitta Asplin, 58. “It’s the human body – nothing more!”
But others said it was all a very bad idea.

“This is extreme liberalism and why America‘s in decline,” shouted one woman, who said she was a doctor but declined to give her name. “It’s degrading to women to tell them to expose their breasts publicly.”
“I’m not shocked – we’re in New York City,” said Lindsay Hall, 28, of Maryland. “But speaking from a woman’s perspective, I disagree with them. There’s something to be said for modesty,” she added.