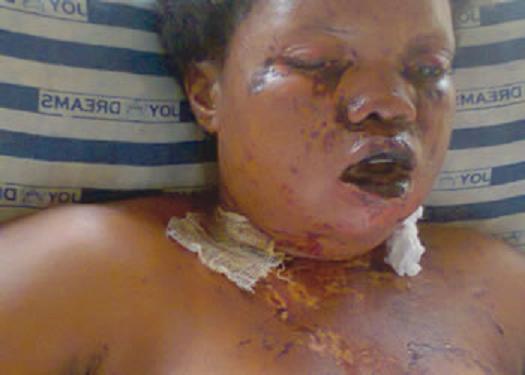 A housewife, Mrs Suzanna Fawole (38), has been remanded in Ife prisons in Osun State after she was   arraigned in Magistrates’ court, Modakeke on Monday, June 3.
Fawole was accused of bathing one Funmilayo Aderibigbe (35), whom she suspected to ber husband’s lover, with a liquid substance suspected to be acid, thereby causing her grievous bodily harm.
The acting Chief Magistrate, Mr O.A. Ayilara ordered that the accused be remanded in Ife prison custody while the case was adjourned till July 1 for further hearing.
May 6, was like any other day for Aderibigbe who resides on Adeboye Street, Ife-Modakeke road. Set for the day ahead, she went ahead to prepare herself for the activities she had lined up for herself, oblivious of what was in stock for her.
Before the end of the day, however, her once-beautiful physique which made her the toast of all, suddenly crumpled under the subduing power of acid. She was almost turned into a monster such as ones usually seen in horror movies after she was allegedly bathed with acid by Fawole.
Crime Reports gathered that Fawole had alleged Aderibigbe of having an affair with her husband. As a result, the suspect had sent a number of threatening text messages to the victim, warning her to steer clear of her husband. Aderibigbe reportedly ignored the messages and went about her life until the deadly liquid was used to arouse her from her perceived indifferent attitude.
Residents of the area were said to have been infuriated by the suspect’s act, as an angry mob reportedly gathered, with the intention to revenge Fawole’s act but immediately police officers and men attached to Modakeke Division of the Osun State Police Command were alerted on the occurrence, Crime Reports gathered that they quickly moved to the scene to control the crowd and prevent a serious crisis from erupting.
It was said that peace was eventually restored to the area after the suspect had been arrested. The victim was also taken to Obafemi Awolowo University Teaching Hospital Complex, (OAUTHC) Ile-Ife for prompt medical attention. Her mouth and tongue were said to have been badly affected that she was being fed through the nose.
During interrogation, Fawole reportedly confessed that she decided to teach the victim a lesson out of frustration and fear of losing her husband to the lady. The victim was said to be fond of going to the matrimonial home of the suspect to meet her husband with whom she was suspected of having a relationship. Fawole admitted beating Aderibigbe before pouring the acid on her.

FOR Complain/Post Removal: SEND Message To Our Email ([email protected]naijauncut.com)