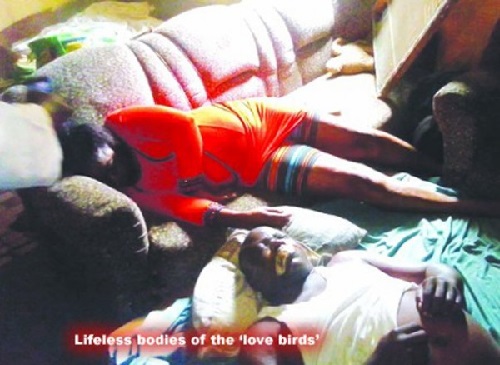 Men be careful where you put your joystick so it won’t lead you to an early grave. What a way to die.
A fashion designer simply identified as Akeem, and his lover (name unknown) have died after they were involved in a sex romp at the former’s residence at 12 Igan Road, Ago–Iwoye area of Ogun State while his wife and four children were away. The sad drama occurred on Wednesday, October 16, 2013.

Akeem, 52, was said to have invited his long time concubine to his home after his wife and four children travelled to the village to celebrate the ‘Ileya’ Muslim festival with their extended family. And they had a marathon sex from Tuesday evening till Wednesday morning.
According to eyewitnesses, Akeem sneaked-in the lady into his apartment very late on Tuesday night, after other tenants had gone to bed. Unfortunately, alarm was raised when the tenants didn’t see him the next morning. After several knocks on his door, it was forced open; shockingly, it was his corpse that was found on his matrimonial bed. Eyewitness account revealed that it was obvious that he had made love to his girlfriend whose lifeless body was also found lying on a couch where she must have crawled from the bed before she breathed her last.
Another tenant, Mr. Idowu Odunsi, who expressed shock at the demise of his neighbour, testified that he had seen Akeem and the lady at Alubari Fashion shop, the shop Akeem managed with his wife up until “Ileya day”. Odunsi said he caught them in a very romantic position and was certain that Akeem would spend the night with the lady.
He said he was therefore surprised the next morning, when his randy neighbour was found dead with semen stains in his underwear. He added that his father, who Akeem had assisted in slaughtering the ‘Ileya’ ram a day before his demise ordered them to break Akeem’s door when they couldn’t find him in his shop and nobody had seen him in the compound that morning.
When the DPO was contacted, he said it was true that Akeem and his guest were found dead in Akeem’s apartment and that he suspected that their death was caused by the generator fumes and not thunderbolt, as widely believed by the people in the area. He added that the corpse would be taken to the general hospital for autopsy, to determine the actual cause of their death.