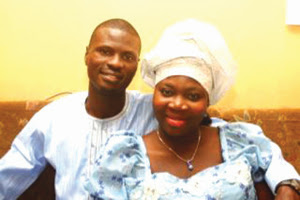 The popular saying that hell has no fury than a woman scorned came to pass on Monday at the Surulere residence of a banker, Bimbo Ajetumobi Daniju and her gospel singer husband Olalekan Idowu Daniju when the woman allegedly took a knife and sliced her husband’s penis during a fight.

Bimbo, staff of a new generation bank in Lagos was said to have accused her husband of not taking care of her and their only child, Opeoluwa. The husband disagreed and while fighting, Bimbo allegedly seized her husband’s penis and sliced it with a knife. Bimbo denied using a knife but her fingernails to teach her husband a lesson on how not to treat a woman. The ugly incident happened on Monday at their Falolu Street, Surulere home.

Pics of the sliced penis after the cut…*viewer discretion advised* 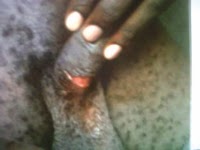 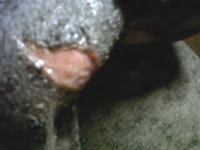 The matter was reported to the police at Surulere station and the woman was arrested. In her statement to the police, Bimbo denied using a knife on her husband’s penis but her fingernails.
She was later released on bail when her husband insisted that he was not interested in pressing charges against her.

Trouble started on 16 December when the banker who is a staff of the Agege Motor Road branch of the bank, accused her husband who has just returned from the church, of failing to provide for the needs of the family and leaving her to do everything. She also accused him of being selfish and uncaring.

She reportedly shouted at Olalekan who was eating and when he didn’t answer, poured his plate of food on his head. She took a bucket found in the room and smashed it on his head. This resulted in fighting.

Their neighbours separated them and Olalekan went to his sister’s shop to seek refuge but not done yet Bimbo allegedly followed him there and threatened to stab him with a broken bottle.
Relatives and neighbours, it was gathered, intervened and pleaded with the couple to give peace a chance but the couple continued to live like a cat and mouse.

Madam Kehinde Daniju, sister of Olalekan told P.M.NEWS that when her brother ran to her for help, she had to call their mother and other relatives to settle the matter for them in the family house they lived.

She explained that Bimbo’s mother who also lived around the area came and told her daughter not to accept reconciliation until Olalekan got a job. She blamed the couple’s constant disagreement on Olalekan’s refusal to get a job.

When she was leaving she took along the couple’s only son, Opeoluwa Daniju.

This did not go down well with Olalekan who ordered his wife to go to her mother’s house and bring his son before 8 p.m. or there would be trouble.

It was said that Bimbo left the house before 8 p.m and returned 30 minutes later without Opeoluwa.
This resulted in another round of fighting during which neighbours and relatives intervened again to separate them.

Narrating his story, Olalekan said he woke her up on Sunday to ask what she would be wearing to the church so that he could iron it but she didn’t reply.
“ I picked up my son’s cloth, ironed it, bathed him, had my bath and left both of them at home and went to church. In between the service, I came home to check on them and I met her cooking, I even joked that thank God there’s something for them to eat.

“I went back to church and after the service I was I hungry I bought bread and beans to eat and as I got inside, my boy told me he also wanted to eat bread and I gave it to him.

When she learnt that I gave the boy bread, she said I didn’t bother to ask her where she got money to prepare the rice that she ate and she started calling me several unprintable names.
“I responded again and this time it was a huge mistake. She just came near me, carried the plate of beans and pour the food on my head. She held my tie shouting and cursing me at the same time. I managed to extricate myself from her grip and ran out. She nearly suffocated me with the tie. She pursued me and broke a plastic bucket on my head but I continued to run. She picked up a bottle, broke it and threatened to stab me with it. This is a woman that is about five month pregnant.
“I ran to my sister’s shop and tried to involve her but she stayed out of the matter because they all know that she is rude, stubborn and violent. There was a day she and her brothers came here with thugs from Ojuelegba they wanted to beat up everybody here. She has chased me on the street with all sort of dangerous things. I don’t really know what she wants to achieve with all this but that day, her mum came, my mum’s sister came also and they tried to resolve the whole thing.

“I saw my mum’s sister off and before I came back, my mother-in-law had taken my son away and I was like we are trying to solve one issue and you are trying to cause another problem. I told her that if by 8p.m. that evening my child is not back home, she would not find it funny.

“I said that to make her know that I was serious but she said that there’s nothing I can do. She left the house before 8p.m. and came back 30 minutes later without my son. She took her bath and went to sleep I went to my sister and told her I am going to my mother-in-law’s house to get my child but my family ask me not to go there. At that time, I was tired, confused and hungry. I picked up my laptop but while I was trying to watch a movie I fell asleep in the sitting room.

“She woke me up at about 2a.m.. I was in a pair of boxer shorts. She told me that it is either I kill her or she kills me and within seconds she had torn my shorts. This was not surprising anyway as she had torn many of my clothes in the past. She said ‘I am going to kill you this morning. You think I am joking’. The whole thing happened so fast I just felt her hand in holding my penis, and the next thing was blood flowing. I started shouting and crying for her to take me to the hospital.

“She said ‘hospital ke, that’s where you are going to die today’ and that was the last time I saw her. I don’t know how she left the house at that time of the night. She changed her clothes, took a big bag and left, only for us to see her two days later at the police station.
There and then, I decided I cannot continue living with her, she could just decide to put poison in my food and kill me one day.

“It’s only a person that’s alive that can explain anything. She could just poison me and cook up a story just like she did at the police station where she told the police officers that I woke her up at 2a.m. and started hitting her, almost beating her to death and the officers clapped for her for a lovely story. The officers asked how come I did all that and she had the strength to run away and she didn’t run to the hospital, that is, someone that was almost being beaten to death should go to the hospital and there was no doctor’s report. The person you injured brought his own medical report, we could see that the injury was bandaged.

Efforts to speak with Bimbo at her mother’s home proved abortive as our reporter was prevented from talking to her.