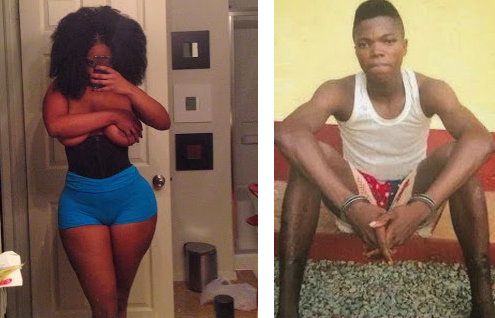 Detectives in Nsukka Command of Nigeria Police Force, Enugu State, were dumb-founded, recently, with the startling confessions of a 19-year-old drop-out over his exploits with ladies using a strange ring. The suspect, Chukwuebuka Ani, confessed that he uses ring to attract young girls and married women.

DETAILS OF HIS EXPLOITS
Narrating his incredible exploits, the suspect who was arrested by members of a vigilante group following his suspicious movement at Umabor village in Opi, Nsukka Local Government Area, after he fled from his village, confessed that he was initiated into the secret cult by his friend at Community Primary School, Isiagu, Awka, Anambra State who gave him biscuits and sachet water during break time.

According to him, at night, that my friend appeared and asked me to follow him. Unknown to me, the biscuit and water he gave me earlier had automatically initiated me into their cult. He took me to a lady he identified as Amarachi Eze, who lives in a four-storey building in Awka
HYPNOTISES WOMEN WITH RING
“The lady told me that I should never disclose to anybody what I saw. She used her finger nail to give me a mark on the chest and she licked the blood that came out from the mark. She then asked me to be visiting her on a weekly basis. Each time I visited, she will compel me to make love to her. After that, she will give me N5, 000.00. She was also paying me N15,000.00 every month and she gave me two rings which I use to attract girls. However, I was forbidden from making love to harlots in brothels.”

CULT MEMBERSHIP AFTER S*X
Chukwuebuka stated that he was in that game for over three years and each time he tried to escape from the cult, the lady will threaten to kill him, pointing out that he has reported to the police but he ended up being detained for days while the lady will still come to release him and request for s*x.

“She will also direct me to continue to initiate more people. I found out that any girl I had intercourse with, will automatically become a member of our cult group. Also, I discovered that once I insert the ring in my mouth, anything I tell somebody must be accepted and obeyed to the last letter.

SUICIDE ATTEMPT
At a stage, I was fed up with the whole thing and I was thinking of committing suicide. However, when I remembered that I am the only child of my peasant parents, I chose the option of returning back home to fend for my self. While at home, I could not afford to pay for my secondary education. I decided to learn how to repair generator and barbing.

Unfortunately, after I was freed, I could still not afford to be on my own due to lack of funds to purchase working tools. In spite of my decision to return home and turn a new leaf, I still did not discard the evil rings. I kept on using it to make love to a good number of girls and married women that crossed my way. There were so many that I can not identify them. I was only interested in having fun and initiating them into the group as directed by the lady, Amarachi.”

TANGO WITH HOMO-S*XUALS
“One man who is a gay approached me at a certain joint, bought few things for me, gave me his complimentary card, and asked me to come to Abuja if I am interested that he will give me N100,000 for love tango in one of the best hotels. The complimentary card is with the police. I cannot remember the man’s name but if the police can give out the card, you will see his name. One other gay lover, Ifeanyi at Ugwuoba in Anambra State, is in prison now.

He has defiled many young boys. Ifeanyi claims to be a Pastor but he is a well known homo-s*xual in the area who defiled one small boy and was imprisoned about two or three months ago. He has many shops, barbing saloons, film rentals among others which he uses to entice young boys and perfect his illicit acts.”

HOW HE CAME TO NSUKKA
“One day, I just decided to move out of the village. I came to Gariki, Awkunanaw motor park in Enugu and joined Peace Mass Transit to Nsukka. When the vehicle reached Opi junction, some people dropped and I decided to follow as I have never been to Nsukka before. When I came down, I saw a barbing saloon and entered there. Some boys were chatting inside. I told one of them called Chinedu that I was looking for a wife to marry.

He laughed at me and said he could not help out. It was getting late and I pleaded to pass the night with him and he obliged my request. I followed him to their house and on entering the compound, one elderly woman inquired from him who he was coming with. Soon after the woman left us, she entered their room and I over heard her chanting some incantations. Few seconds later, she came out and branded me a thief, kidnapper, ritualist, 419, s*x maniac and cultist, unknown to me that the woman is a herbalist.

She, thereafter, invited the local vigilante group to arrest and interrogate me with a view to finding out my mission in their community. I was roughly manhandled before they invited the police who equally tortured me to find out the exact fact of my mission. I fabricated lies to enable the police leave me but all the things I said did not go down well with them. They then took me to the Area Command headquarters in Nsukka town.”

POLICE ADVICE
A competent senior police officer who spoke with Crime Guard over the startling revelations by the suspect, advised young boys and girls to be careful with the kind of friends they keep, both at school and outside their homes pointing out that investigations are on going to unravel the authenticity of the sordid story and if possible arrest the wicked women who is the leader of the cult.